If I was to take one lesson away from BCM300 this semester, it would be this: analog game development is deceptively difficult.

For an assessment that seems relatively simple on the surface, the numbers of layers that need to be addressed are staggering, not least of all grasping that initial spark.  My first week of brainstorming left me starved for ideas.  I originally toyed with the idea of a card game that played on the catchphrase “dogs of war” from Shakespeare’s Julius Caesar, a Pokemon-style game with cards depicting cute dogs in war costumes from different eras, e.g. a military dog or a centurion dog.  However, this idea lost traction for a couple of reasons: another classmate was doing a similar dog-themed card game (check out Kris’ fantastic Dagwood Dogs game), and the idea wasn’t received particularly well when I pitched it to others.

However, it was during this initial pitch that I conceived my new idea.  Whilst talking to Chris about my game idea, I examined his cart of board games and discovered Honshu, a world-building card game.  Without discussing the rules too much, Honshu is a typical Eurotrash style game; peaceful and individually motivated, it focuses on reaching a goal oneself without direct conflict between players.  One particular element caught my eye – Honshu’s unique, grid-like card design was a mechanic that I hadn’t come across before, with each card made up of six squares depicting various landscapes such as towns and water. 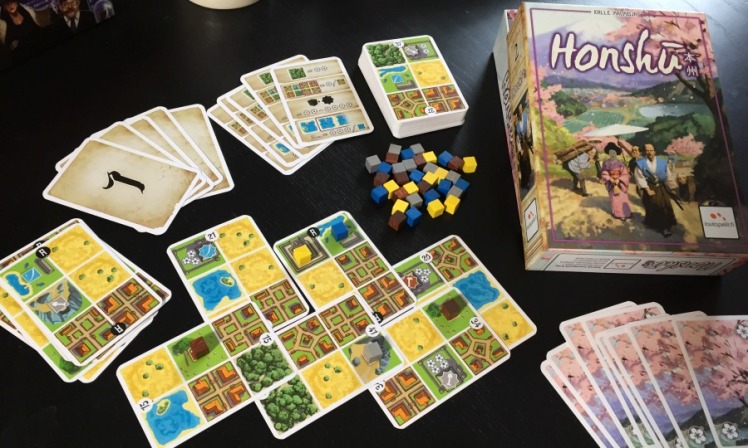 I began to brainstorm ways in which I could tweak this mechanic to fit with my initial war-themed game.  I was leaning towards a war theme due to my fondness for player vs. player games such as Risk, the archetype of an Ameritrash game.  Blending this theme with Honshu’s card mechanic resulted in the foundation of my game – a fortress-building, battle-themed card game.  The game does not have a name as yet, but I am considering Last Man Standing as a work-in-progress title.

The game is set in a fictional, medieval-esque landscape that is full of undiscovered wonders.  Your army has uncovered a rare treasure or resource that you will attempt to defend in any way you can.  To defend your treasure, you can place landscape cards in front of your treasure to build a fortress.  You can also attack other fortresses by playing attack cards with various abilities.

Last Man Standing would need very specifically cut cards that are not the size of a typical playing card.  This is due to the 3×2 grid style of the defensive cards, which would each need to be the same size in order to easily overlap and integrate with one another.  The treasure cards also need to be cut to a unique 2×4 grid size.  These specifications means that the cards would need to be of high quality and materiality.  As a guide, I would like them to have the texture and design of Honshu‘s cards, which are also a slightly different size than regulation.

The game also calls for two dice, one regular D6 and a unique D4.  As the D4 has letters rather than numbers, it will need to be produced solely for the game.  I tested out a trial run of the lettered D4 by 3D printing my own version, which worked well considering it was only a basic 3D print.

At this stage, the game does not require a board of any kind.  As the game is only made up of cards and dice, the game could be sold in a small box which would decrease estimate costs related to packaging.

As a whole, Last Man Standing is an abstraction of battle and conquest.  It aims to emulate defensive fortresses through icons on cards, which build a “landscape” on which the “fortress walls” are constructed.  By demanding that some landscapes require higher rolls to cross over, it mimics the struggles of an army approaching a well-placed fortress.  Waves of attack are abstracted as dice rolls, and mimic the real-life war strategies at play as well as luck through the roll of the dice.

This abstraction is further echoed in the cards’ designs, which are currently very simple and consist of icons on cards.  Although the simplicity works well at this early stage, it would be wonderful to expand on the designs by viewing the defense card icons from the top down, similar to Honshu, as this allows them to fit together and be viewed from any direction.  The attack cards would ideally be similar to Pokemon cards in their layout and design, however rather than be cutesy they would be more dramatic and simple.  Perhaps line drawings and simple shading could work to emulate this aesthetic.

(note: these rules will be expanded further in gameplay – this is merely a summary of key points.)

For future iterations, it seems that I should focus on further diversity and varying strengths in both attack and defence cards to unbalance the game and overcome stale gameplay.

One thought on “battle to be the last man standing.”