I came into this subject knowing I wanted to focus my studies on Japan.  The country has fascinated me ever since I began studying the language in high school, and that passion has not dwindled over the last 8 years.  I hope to work with and among the Japanese in the future, perhaps even working and living in Japan, and I am starting that journey by hopefully studying there as an exchange student next year.

Therefore, my research project for Digital Asia will centre on my preparations for exchange next year.  As I have no first-hand experience with Japanese universities, nor know anyone who has been to the unis I am considering, my first stage of investigation will involve analysing the various unis and making a selection based on the information I find online.

As a UOW student I only have a handful of Japanese universities to choose from, and I perused the list with great interest at first.  It soon became clear that Japan is a great place to study if you want to learn Japanese (obviously), commerce or engineering, but media and communications?  In English?  Not so much.  I was left with only two proper choices – J.F. Oberlin University and Sophia University.

As is the case in this digital age, my first impression of each university came from its campus.  A quick Google Image search gave me what I needed.  Straight away I know which I preferred: the stunning J. F. Oberlin University.

Think of it as the UOW of Japan – outside of the main cities and with a little more greenery than the universities in Central Tokyo.  By comparison, Sophia University is the UTS of Japan – in a great, accessible location but lacking the natural beauty of its more rural counterpart. 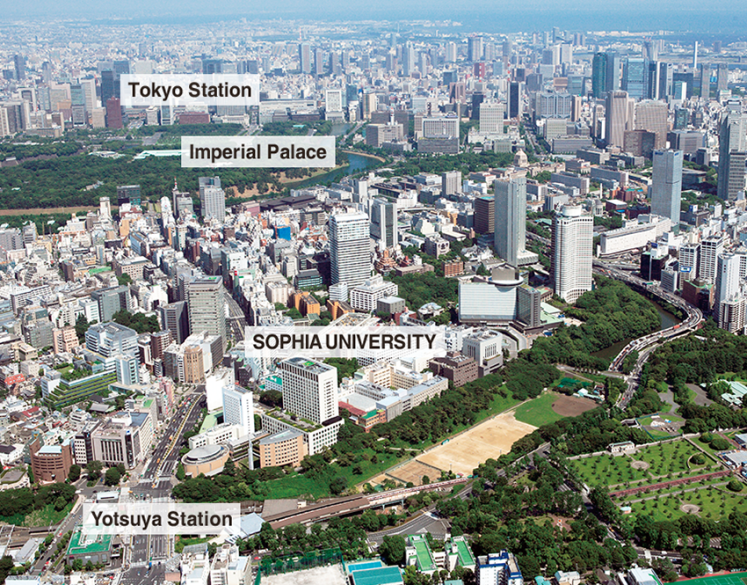 The next important aspect of each university was the subjects they had to offer.  From what I have read of studying in Japan, it seems to me that the Japanese university system is trying to encourage foreign students to study there, as the TopUniversities website claims.  It is very interesting to hear this, as Japan is one of the most highly monoethnic countries in the world (98.5% of all the people who live in Japan are native Japanese), and it signals a shift towards a more multicultural and interconnected future.

“The government is keen to attract more international students, and has set a target of having 300,000 foreign students in the country by 2020 (it reached the 100,000 mark in 2003). As a result, universities are focusing on making life easier for foreign students, from the application process all the way through to finding a job after graduation.” – TopUniversities

Well, while Japanese universities may be looking for foreigners in theory, I believe it is not the case for one of these particular universities.  As a hopeful 日本の大学 (nihon no daigaku – Japanese university) student, there are only a few ways I can access information about my host universities; through UOW’s resources or through the Web.  Without any available contacts at UOW, I have no choice but to turn to the websites of these unis to decide between them.

My first thoughts upon entering the Sophia University website was disappointment.  Compared to the UOW website, I found that the uni’s exchange homepage was unnecessarily complex and difficult to navigate.  In order to find possible subject choices, I was given a 123 page PDF document to peruse and read in fine print, half of which was written in Japanese.  It is not approachable for foreigners and does not make the application process easy.

By contrast, J. F. Oberlin’s website was clean and straightforward, if a little simple.  I found all the information I needed in regards to accommodation, semester dates, language programs and subjects that suited my degree structure.  Everything was in English (if a little poorly translated), showing that the university had made an attempt to cater for an international, English-speaking audience.  It is these little things that make a university stand out – just from examining J. F. Oberlin’s digital offerings, I can tell that they have made an active effort to accommodate foreign students.

My research into Japanese universities and their offerings is ongoing at this stage, as I finalise my study plans and apply for appropriate subjects.  I am also attempting to secure an internship opportunity during my time overseas which will require some communication between myself and a Japanese company.  As this project is rooted firmly in my own future, it is important to me and to my future plans that I continue to document my process of Japanese exchange.

4 thoughts on “becoming a gaijin girl.”